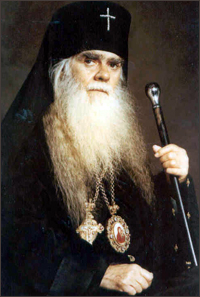 Until recently, the concepts and terms “Christian” and “Orthodox” were unambiguous and meaningful. Now, however, we are living through times so terrible, so filled with falsehood and deception, that such concepts and terms no longer convey what is significant when used without further clarification. They do not reflect the essence of things, but have become little more than deceptive labels.

Many societies and organizations now call themselves “Christian”, although there is nothing Christian in them, insofar as they reject the principal dogma of Christianity — the divinity of our Lord Jesus Christ, as do several of the newest sects, to which the very spirit of true Christianity, which follows so naturally and logically from the teaching of the Gospels, is generally quite foreign.

Of late, the term “Orthodox” also has ceased in large measure to express what it should, for even those who in fact have apostasized from true Orthodoxy and become traitors to the Orthodox Faith and Church continue to call themselves “Orthodox”.

Such are all the innovators, who reject the true spirit of Orthodoxy, all those who have started down the path of mutual relations with the enemies of Orthodoxy, who propagandize for common prayer and even liturgical commuion with those who do not belong to the Holy Orthodox Church. Such are the “renovationists” and contemporary “neo-renovationists”, the “neo-Orthodox” (as some of them openly style themselves!), who are clamoring about how essential it is to “renew the Orthodox Church”, about some sort of “reforms in Orthodoxy”, which allegedly has become “set in its ways” and “moribund”. They harp on such things instead of focusing their prayerful attention on the truly essential renewal of their own souls and the fundamental reform of their own sinful nature with its passions and desires.

They insistently proclaim union with heretics, with non-Orthodox, and even with non-Christians. They proclaim “the union of all”, but without the unity of spirit and truth which alone makes such union possible.

Such, for example, in our days are the Ecumenical Patriarchs of Constantinople, who in the past recognized the “Living Church” in Soviet Russia as legal and now recognize the Pope of Rome as the “head of the whole Christian Church”, and even admit the Papist Latins to Holy Communion without their first being united to the Holy Orthodox Church.

Such are all those who actively participate in the so-called Ecumenical Movement, which is striving so blatantly to create some sort of new pseudo-church out of all the denominations now existing.

Such, too, are those many others who are not completely faithful to our Lord and Savior and His Holy Church, but serve His vicious enemies or please them in one way or another by helping them to realize their anti-Christian goals in a world which has turned away from God.

Who will dare to deny us our lawful right not to recognize such people as Orthodox, even though they may persist in using that name and in bearing various high ranks and titles?

From church history we know that there have been not a few heretics and even heresiarchs of high rank who were solemnly condemned by the Universal Church and removed from their offices.

But what do we see today?

This, sadly, is an age of unlimited concessions and sly collaboration, when even the most scandalous heretical actions or statements disturb hardly anyone. Very few react to this manifest apostasy from Orthodoxy as they should, and as for condemning these new heretics and apostates — there is no point in even thinking about it. Today everything is permitted for everyone and nothing is prohibited for anyone, except in cases where someone is personally hurt, offended and insulted when their own folly is pointed out. Oh, in such cases, this is unforgivable! Then threats make their appearance, based on those forgotten canons, which otherwise are “obsolete, outdated and unacceptable” in our advanced, progressive age!

That is the kind of moral disintegration, of real spiritual monstrosity, that faces us.

The truth is readily ignored and brazenly flouted, while evil, just as readily, celebrates its triumphant victory and gloatingly mocks the truth which it has overthrown and trampled upon.

Is it possible to reconcile one’s conscience to this contemporary situation?

Can one close one’s eyes to all these lies and falsehoods and calmly act as if one saw nothing wrong?

Only individuals whose consciences are burned out or completely lost can do so! That is why it is more than strange to hear some, imagining themselves to be Orthodox, call the Russian Orthodox Church Outside of Russia, “Old Believer”, “schismatic”, “Black Hundredist”, “retrograde”, “obscurantist”, and so on, simply because we will not walk in step with these times and dare not to apostasize in anything from Christ’s Gospel and the original teaching of the Holy Church, and therefore consider it an obligation of conscience to condemn this clear and obvious evil of contemporary life which has already penetrated into the Church.

In fact, it is not we who are schismatics, but all those who follow the spirit of these times and by that act cut themselves off from the One, Holy, Catholic, and Apostolic Church, apostasizing from the apostolic faith, from the faith of the Fathers, from the Orthodox faith, which established the whole world … These people are obviously hurtling over the precipice of apostasy — into the abyss of perdition, together with the whole contemporary world, burying themselves in their apostasy from the life-creating God.

Do you hear the Apostle’s divinely inspired words, modernists, attempting to distort Christ’s Gospel and become so readily and zealously “conformed to this world”, evil and alluring as it is?

We readily accept your indictment that we are “old believers”, considering it an honor to our traditionalism; but how does your Christian conscience get on with your innovating, which overthrows essentially the ancient, true faith and Christ’s unchanging Church?

Was it not the Apostle who warned all Christians:

“Be ye not conformed to this world, but be ye transformed by the renewing of your mind, that ye may prove what is the good, and acceptable, and perfect will of God” (Rom. 12:2).

We are “old believers”, but not schismatics, for we have never cut ourselves off from the true Church of Christ.

We are in union with our Head, Christ the Savior, with His holy Disciples and Apostles, with the Apostolic Fathers, with the great Fathers and Teachers of the Church, and with the great luminaries and pillars of the faith and piety of our Fatherland, Holy Russia. But you are in union with some sort of innovating, self-appointed teachers, whom you advertise everywhere so unlawfully and obstinately, disparaging and at times even daring to criticize the genuine luminaries of our Holy Church, who have pleased God and been glorified in many ascetic struggles of piety and miracles throughout the course of her two-thousand year history.

This being the case, which of us is really the schismatic?

Of course it is not those in the spirit of traditional Orthodoxy, but those who have apostasized from the true faith of Christ and rejected the genuine spirit of Christian piety; even though all the contemporary patriarchs, who have altered our age-old, patristic Orthodoxy, may be on the latter’s side, as well as the majority of contemporary, so-called Christians.

Indeed, Christ the Savior did not promise eternal salvation to the majority, but, quite to the contrary, He promised it to His “little flock”, which will remain faithful to Him to the end, in the day of His Glorious and Terrible Second Coming, when He will come “to judge the living and the dead.”

“Fear not, little flock,” He said, painting the frightening picture of the last times of apostasy from God and persecution of the Faith before our mind’s eye, “For it is your Father’s good pleasure to give you the Kingdom” (Lk. 12:32).

This is why all we have said above prompts us to re-examine the terminology that has been accepted up to the present. It is insufficient in our time to say only “Christian” — now it is necessary to qualify this by saying “true-Christian”. Similarly it is insufficient to say “Orthodox” — it is essential to emphasize that one is not referring to an innovating modernist “Orthodox”, but to a true Orthodox.

All genuine zealots of the true faith, serving Christ the Savior alone, have already begun to do this, both those in our Fatherland, enslaved by ferocious enemies of God, where zealots depart into the catacombs like the ancient Christians, as well as in Greece, our brother nation, where the “Old Calendarists” not only refuse to accept the new calendar, but also reject all innovations of any kind. They have a special veneration for that champion of Holy Orthodoxy, St. Mark, Metropolitan of Ephesus, thanks to whose steadfastness the impious Union of Florence with papal Rome in 1439 failed.

In our firm stand for the true Faith and Church, it is essential only to avoid everything personal — pride and self-exaltation, which inevitably lead to new errors, and eventually even to a fall; we have already witnessed this in several cases. It is not ourselves we should praise, but the pure and immaculate Faith of Christ. No fanaticism is admissible here because it is capable of blinding the spiritual eyes of such who are “zealous not according to knowledge”. Rather than confirming one in the Faith, this blind fanaticism can sometimes lead one away from it.

It is important to know and to remember that a true Orthodox Christian is not someone who just accepts the dogmas of Orthodoxy formally, but a person who, as our great Russian hierarch St. Tikhon of Zadonsk taught so beautifully, thinks in an Orthodox way, feels in an Orthodox way, and lives in an Orthodox way, incarnating the spirit of Orthodoxy in his life. This spirit — ascetic and world-renouncing, as is clearly set forth in the Word of God and the teachings of the Holy Fathers — is most sharply and boldly denied by the modernists, the “neo-Orthodox”, who want in everything to keep step with the spirit of this world lying in evil, whose prince, in the words of the Lord Himself, is none other than the devil (Jn. 12:31). Thus it is not God Whom they desire to please, but the “prince of this world”, the devil; and thereby they cease to be true Orthodox Christians, even if they call themselves such.

If we consider this more seriously and deeply, then we will see that this is precisely the case and that modernism with its innovations is leading us away from Christ and His true Church.

Let us be horrified at how rapidly apostasy has proceeded, although the modernists do not see it or feel it, inasmuch as they themselves are taking an active part in it.

And so let us not fear to remain in the minority — far from all their high-sounding titles and ranks. Let us always remember that even Caiaphas was a high priest of the true God, and to what depths he sank — to the horrible sin of deicide!

While living in this world which has apostasized from God, let us strive not for specious human glory and cheap popularity, which will not save us, but only to be within Christ’s “little flock”.

Let us be True Orthodox Christians, not modernists!