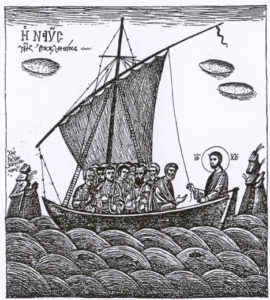 Let’s ask a simple question: How did the understanding of the term ‘canonical’ change? According to the Holy Fathers, the venerable term, ‘Canonical’ always referred to the pious observance of the Holy Canons of the Church, and, most certainly, to those Canons relating to the beliefs and pious practices of the holy Orthodox Church.

However, because of wars and political turmoil in the 20th century, the administrative structure of the Church became disorganized, most especially in the Diaspora. ‘Mother,’ in other words, ethnic, Churches sought to preserve Orthodoxy by preserving its canonical organization, i.e., the organization described by the holy canons for dioceses and synods. Sadly, in the course of this organizational struggle for external order, any canons relating to the Apostolic Faith and the doctrines of the Fathers of the Ecumenical Councils, that is, to her inner, mystical life, were deliberately overlooked by the hierarchs who considered themselves to be the architects of this quest for order. These men were prompted by the syncretistic and anti-dogmatic spirit then prevalent, a spirit which continues today, a spirit which controls all current thought and practice in World Orthodoxy.

Satisfied that they had jettisoned the mystical life of the Church of Christ, these revisionist hierarchs in the Diaspora, and elsewhere, hastily sacrificed the Church’s unity in Apostolic truth for the modern idea, foreign to guidance of the Holy Fathers, of the unity of mankind. This modernizing group imposed an external administrative union in order to preserve the unity of an outward ecclesiastical apparatus, now stripped of the inner life of the “faith once for all delivered to the Saints” (Jude 3) with all parishes welded together under one headquarters.
As an example of how this new restructuring of Orthodoxy in the Diaspora functioned, Parish Council members taking their pledge in Greek Archdiocese of America churches were asked to promise to be obedient to the canons and traditions of the Orthodox Church. Generally, these canons and traditions are viewed as abstract principles, which were not defined or clarified by the priest administering the pledge. This pledge is usually interpreted as complete obedience to the ruling hierarch.
The renovating hierarchy, as the chief plank in its modernizing platform advanced the novel theory, unknown to the Holy Fathers, that the canons are Laws which are to be interpreted by the ruling hierarch who decides what is and what is not ‘canonical’ in this new way of thinking. This is the way that the Patristic, truly Orthodox, understanding of the canons was set aside.

A former bishop of the Greek Archdiocese who taught at Holy Cross in Boston shared his thoughts with his students about the Holy Canons. He remarked that over the years he had carefully studied the canons and had come to one conclusion: there was only one canon which needed to be obeyed in the church. He cynically declared that only those canons which spoke of hierarchal authority and obedience to the bishop needed to be obeyed. All other canons could be ignored.

Such a militaristic or, better, papal interpretation of the canons allowed individual patriarchs, metropolitans, archbishops and bishops the freedom to act entirely apart from the wisdom and guidance of Holy Tradition. Such renovationism, so they thought, gave them unrestricted license to ignore any and all of the Holy Canons. They thus played the role of the sole authentic interpreters of the canons. This attitude reduces all the canons to one straightforward operating principle: “Obey your Bishop.” With this axe in hand, the modernizing hierarchy quickly proceeded to align the Church with the spirit of the age and not with the Spirit of Christ.

Such a procedure may well bring to mind to mind the current method by which decisions are made in the Supreme Court of the United States of America. The Supreme Court now feels free to change prior decisions of the Court as well as laws passed by legislative bodies on the basis of the contemporary understanding and interpretation of moral values. For example, abortion may have been wrong at one time and condemned by the Supreme Court, but the Roe vs. Wade decision defined that there were other value systems which needed to be acknowledged. For the modern way of thinking, morality becomes a relative value and is never absolute. The modern mind desires to live in a world where there are no absolutes (aside for its demand that there are no absolutes), aside from its nihilism. Further, there is no Divine Authority on which to base any decisions. God has been dethroned and in His place stands the Supreme Court.

The interpretation of the Holy Canons has thus become a selective response controlled by the contemporary moral and irreligious scene. Ecumenism, a form of relativism, is in. The many canons forbidding joint prayer with non-Orthodox are out. These canons, so the story goes, are “old fashioned.” There is no hesitation in having non-Orthodox Christian persons participate alongside the clergy of World Orthodoxy at funerals, in wedding services, vesper services, Theophany services, and even in Divine Liturgies. And this has happened often enough over the past 40 years that it has become a standard practice. Many, but not all, Orthodox Christians are not surprised or disturbed when such concelebrations take place. Very many Orthodox Christians in the so-called “Canonical” Churches are confident that the union of the churches has already occurred. The rites of the Roman Catholic and Protestant Churches are now acknowledged as “grace filled” by all the so-called “Canonical” jurisdictions, while the Mysteries of the traditional Orthodox Christians are deemed as invalid. What is ignored is that the Church has steadfastly taught that outside the Church there is no salvation; no mysteries (St. Cyprian of Carthage? 268).

Indeed, some clergy of the Greek Archdiocese are known to have declared that the union of the churches has already occurred. The Antiochian jurisdiction’s blasé attitude has allowed Moslems to be godparents, and priests to concelebrate in religious processions with Roman Catholic clergy. The O.C.A. has allowed a monastery that openly recognizes Roman Catholic saints as Orthodox Saints, and whose abbot has said that there is no theological difference between Orthodoxy and Roman Catholicism, to remain uncorrected by the O.C.A. hierarchy. Greek Archdiocese clergy have been scandalized by the fact that the monastery does not keep the fast of Great Lent, and allows the eating of meat during Great Lent. The hierarchs of SCOBA (Standing Conference of Canonical Orthodox Bishops in America) have forbidden their clergy to baptize Roman Catholics and Protestants because, according to these hierarchs, those in heresy have baptismal grace!

The canons are clear in that heretical baptism is not a baptism, but is a curse and defilement. The Holy Fathers teach with one voice that the “One baptism” referred to in the Nicene Creed is the mystery performed under the guidance of a right-teaching, right-believing, Orthodox bishop. If one recognizes the non-Orthodox baptisms then why shouldn’t one recognize the other non-Orthodox rites: chrismation, Holy Communion, etc? Actually, many of the clergy of the “canonical” jurisdictions have already done so.
What makes a church truly canonical? Is it not the adherence to what has been taught everywhere, at all times, and by all the Orthodox Fathers of the Church (St. Vincent of Lerins 445)? If we cannot confess our faith and identify it with the faith of the Church’s confessors and saints, then indeed we are not confessing the Orthodox Christian faith, but we are in reality mocking our ancient Orthodox Faith. But first of all, pray that we may not be lead astray by the “sirens of ecumenism.” We need to be bonded to the spiritual ark of the church and not give in to the compromised faith of those who have rejected the Orthodox Faith and accepted a new adulterated faith, which no longer represents the faith confessed by the Holy Fathers, that is, “the faith which was once for all delivered to the saints” (Jude 3).

And one final point: Not one canon of the Orthodox Church teaches that one has to be in communion with Constantinople (or any other “ancient see”) in order to be canonical or Orthodox!