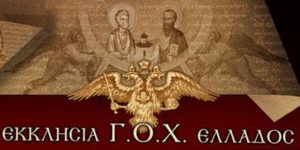 Church of the True Orthodox Christians of Greece

To be read in Church on the Sunday after the

Feast of the Dormition of the Theotokos

Beloved Presbyters and Deacons in Christ;

Divinely beloved Flock of our Most Holy Church

of the Genuine Orthodox Christians of Greece:

May Grace and Blessings from God be with you all!

As is well known, the so-called “Holy and Great Synod of the Orthodox Church,” which the secular media hailed as an especially important and historic event, was convened a month ago in Kolymbari, Chania, in Crete.

For almost a century, and particularly during the past sixty years, the Patriarchate of Constantinople pursued an initiative to convoke such a synod, though on un-Orthodox grounds and with the intention of imposing innovations, as envisioned both by the Patriarchal Proclamation of 1920 and by the soi-disant “Pan-Orthodox Congress” of 1923, under the notorious Freemason Meletios Metaxakes.

The change in the Church Calendar handed down to us by the Fathers, which was audaciously undertaken—wholly uncanonically—in the following year, 1924, in implementation of ecumenist and Αntichristian mandates, opened the “sack of Aeolus” and unleashed the winds of captivity and “ecumenization” on the local Orthodox Churches.

The founding of the World Council of Churches in 1948 and the so-called Lifting of the Anathemas with the Papists in 1965 demonstrated for all to see that the unionist or uniate course plotted by the Patriarchate of Constantinople was not according to God, since it betokened an inadmissible admixture of truth and falsehood and directly contravened the ninth article of the Symbol of Faith: “In One, Holy, Catholic, and Apostolic Church.”

For, as far as the heresy of ecumenism is concerned, there are no heresies or heretics, since the Church supposedly has unlimited boundaries, in which all those baptized in the name of the Holy Trinity are included, all of them together constituting the common Body of Christ. Theological differences are allegedly “different traditions,” constituting legitimate expressions of the same Faith, which have no negative repercussions on the mysteriological grace and fabric of the sundry “ecclesiastical communities” of the heterodox; indeed, by way of ecumenism, all of these ideas have become acceptable and have been proclaimed for decades, being experienced and expressed in many ways and at many levels.

It has, however, always been the desire of those who are Orthodox in name, though in essence heretical ecumenists, that all of the foregoing ideas gain “pan-Orthodox synodal” endorsement and confirmation, so as to be legitimated and to form an obligatory element of their official credo.

In this context they also wanted to resolve other longstanding problems that beset them at a local level and at a broader geographical level.

For this reason they proceeded hastily and impetuously, despite differences that persisted until the last moment, and even in spite of the manifest abstentions of several local Churches, to hold their aforementioned synod, at the insistence of Constantinople, the prime mover in this vision, through its head, Patriarch Bartholomew, and his staff.

However, for reasons substantive and procedural, it had already been emphatically demonstrated that this was not going to be a truly “Holy and Great Synod,” but a “synodal innovation” and a “synodal coup,” the “apostate Synod of Chania,” or, more precisely, a “uniate, ecumenist, and pro-Papal pseudo-synod.”

All of these resoundingly negative, but very true characterizations were evaluatedbothby us beforehand, in our “Message of Vigilance,” issued by our Inter-Orthodox Consultation two months ago, and by sober and impartial critics after the convocation of this essentially false synod in Crete.

From a sense of confessional responsibility, as Shepherds of the Church, with “the edifying of the Body of Christ” and “the unity of the Faith” (Ephesians 4:12, 13) as our foremost duty, we affirm that the ecumenist gathering in Kolymbari, Chania, did not constitute a continuation of the truly Holy Synods of the Orthodox Church, for instead of condemning heresy and heretics, it endorsed the heresy of ecumenism and cautiously, albeit clearly, accepted communities of heretics as “heterodox churches” and their representatives, to whom it issued official invitations, as “observers from Sister Churches”!

Only the Primates of the so-called official local Churches that participated had a vote, and they acted, as has been correctly pointed out, as “collective popes,” while their hobbled episcopal delegations did not have the right to freedom of speech and expression, since, as some of them disclosed, they were pressured and even insulted in cases of disagreement! Whether they signed or did not sign the approved documents was something devoid of essential significance. Their Primates signed, on behalf of their Churches, the prepared documents on six topics, to which some merely cosmetic emendations were made, in such a way that it appeared that there was “synodal agreement” on their ratification, according to an artificial, pre-planned, and well-nigh compulsory agreement.

The principal object of interest was the document “Relations of the Orthodox Church With the Rest of the Christian World,” whereby the heresy of ecumenism, institutionalized and rendered official, won the day (prevailed). The proposed emendations on the part of the New Calendarist Church of Greece, which pertained more to terminology, did not alter the meaning of this unacceptable document and did nothing to avert the introduction of false teaching.

However, all who “resist the truth” and are “reprobate concerning the Faith” (II St. Timothy 3:8) and in error (I St. Timothy 6:21), who are not following sound doctrine and who are reckoned as “deceivers and deceived” (II St. Timothy 3:13)—“such serve not our Lord Jesus Christ” (Romans 16:18), and are for this reason cut off as destroyers of the unity of the Faith of the Church.

Therefore, those Bishops who did not sign the aforementioned document or any other document at that assembly are not “confessors,” as some proclaim, so as to deceive themselves and one another, since they did not dissociate themselves by denouncing false doctrine and disavowing it and its misbelieving exponents, who merit excommunication.

The same holds good for disquieted clergy and laity from the New Calendar Church, who endeavor to prove what is already well known, namely that it was not a Holy and Great Synod; they do this, however, in order to convince themselves and their followers that it was something invalid and therefore not binding or applicable, and that they can, in any case, uninterruptedly continue in communion with those who are demonstrably cacodox. This artful expediency, which probably happens without their realizing it, is deceptive and condemnable.

Equally naïve is the expectation of certain others that the four local Churches that did not take part are supposedly preserving their Orthodoxy and will convene a synod in order to invalidate the pseudo-synod of Kolymbari! It is, after all, well known that the Patriarchates of Antioch and Moscow participate actively in ecumenism, while the declarations to date of those Churches that did not take part in the pseudo-synod contain not a trace of condemnation thereof, save only that they do not regard its decisions as binding for them, since they did not themselves take part, and the principle of mutual agreement was thus violated.

The remaining problems concerning the gathering in Kolymbari—that is, whether it was an event expressive of internationalism, whether prodigious sums were expended, whether worldliness and behind-the-scenes or secular diplomacy were factors, whether the presence of police was intolerable, whether the geopolitical goals of the major Western powers and of the globalist new world order were served—are the side-effects that one would expect of what was, on the surface, an ecclesiastical event, but which, devoid as it was of Divine benediction and approval, naturally gave rise to divers deviations at many levels.

Apart from everything else, it was obvious that this gathering did not deal with issues of immediate concern, such as the re-evangelization of a world prone to sinful passions, the rectification of the liturgical division of the Orthodox over the calendar, nationalist schisms (those of Macedonia and Ukraine, et al.), deluded beliefs and false prophecies, the inundation of occultism and Satanism as signs of the end times, eschatological anxieties, issues in bioethics, a decisive confrontation of the persecution of Christians worldwide, etc., as well as a prophetic and charismatic call to humanity to repent and return to the Church.

In the wake of all these illustrative facts, only a very few have undertaken to break communion with the cacodox ecumenists, in accordance with the canonical Tradition of the Church, and still fewer have threatened to cease commemorating them, with uncertain results. As is evident, the habituation of many, for decades, to direct or indirect communion with heresy has fuddled their judgment and dulled their consciences to such an extent that, at the decisive hour and moment, they have failed, as a consequence, to be receptive to the gift of true Confession, in theory and in practice.

In the face of this deplorable situation, the Holy Synod of the Hierarchy of our Church calls its children to persistence and toinvigoration, so as to maintain the treasure of the Faith unadulterated and to be able to transmit it to posterity. All who believe in an Orthodox manner and do not succumb to the temptation of direct or indirect communion with the misbelieving ecumenists, and who also live in repentance and strive to preserve their faith in the conduct of everyday life, will receive mercy from our Savior, Who loves mankind, in these evil days of apostasy through which we are passing. May the good example of the children of our Church attract many who are caught up in the bonds of error and heresy to the liberty of God’s Grace!

At an ecclesiastical level there is a need for sober assessment and information, and also to come to grips with the misbeliefs of ecumenism. To this end, as well as for the preparation of a truly Holy and Great Synod of our Genuine Orthodox Churches, our Holy Synod has already appointed a special Hierarchical Commission.

We must admit, even so, that the author of evil, the enemy of our salvation and unity, stirs up many impediments, exploiting the weaknesses of human beings, and even of the Shepherds of the Church. Nevertheless, urging all, clergy and laity, to contribute their prayers, we hope that our Lord, the Bestower of gifts, the Head of the Body of the Church, will maintain us steadfast and united to the end, will uphold us in the Grace of Confession, and also in the declaration thereof at an Orthodox Synod as soon as possible, and will vouchsafe us the eternal Kingdom of the Father, and of the Son, and of the Holy Spirit. Amen!

† ATHANASIOS of Larisa and Platamon

† JUSTIN of Euripos and Euboia

† CHRYSOSTOMOS of Attica and Boiotia

† AMBROSE of Philippi and Maroneia

† CYPRIAN of Oropos and Phyle

† AUXENTIOS of Etna and Portland

[signed and sealed as a BONA FIDE COPY]

The First Secretary of the Holy Synod

1 Komentarz on ENCYCLICAL concerning the Ecumenist gathering in Crete