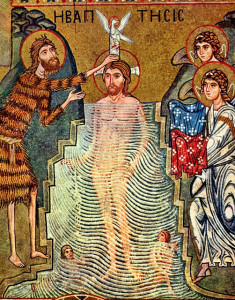 A summary of the lecture delivered on May 14th, 2015, during the international conference “Ex Oriente Lux : the Relations between the East and West over the Centuries” at the Ignatianum Academy of Cracow, Poland, in the presence of HE Jesuit Archbishop Cyril Vasil’, secretary of the Vatican Congregation for Eastern Churches, rector of the Pontifical Oriental Institute and consultor of the Pontifical Council for Promoting Christian Unity.

The unity of baptism, according to the words of St. Paul Apostle (Eph 4:5), results from the unity of faith in one God. The baptismal article contained in the Niceno-Constantinopolitan Creed also confirms that there is substantially an unique and unrepeatable Baptism in substantially the unique Church of Christ. St. Cyril of Jerusalem in Catechetical Lectures teaches that the Baptism of Christ sanctified all the baptismal rites. St. Basil the Great in the 91st Canon adds that all the provisions of the Holy Baptism, among them a triple immersion, are part of the unwritten Tradition, guarded in silence by the Fathers before any profanation.

The Orthodox teaching on the Mystery of Baptism, to the extent specified in the 2nd Canon of the Quinisext Ecumenical Council, forms the basis of non-recognition of the Latin sacraments, what in 1054 became the main complaint against patriarch Michael Keroularios of Constantinople. So, during the Middle Ages, the Orthodox Church refers to the heresy of papism the 7th Canon of the Second Ecumenical Council who set a norm for the Eunomians, baptizing only by one immersion (the same practice was introduced into the Western world by the 4th Council of Toledo in 633), to admit them to Orthodoxy as the Gentiles, that is through by Baptism. Writing about the innovations of the Latins, St. Simeon of Thessalonica noted that they don’t follow the canonical and threefold κατάδυσις (dipping, immersion), but only επίχυσις (infusion); they deny the unity of Baptism and Chrism, which in ancient times was found among the Novatianists; he also expressed its concern about the use of the active formula “ego te baptizo” instead of the passive “baptizatur servus Dei” at the invocation of the Holy Trinity, which blurs the image of the real efficient cause of the Mystery.

That traditional Orthodox position has been politically disrupted after the Union of Florence. A right reimbursement for the canonical “status quo ante” occurred in 1722 and 1755, when the Greek Orthodox Patriarchates have defined a obligatory way of making the conversion to Orthodoxy by the Holy Baptism. This decision was sanctioned by patriarch Cyril V of Constantinople by anathema. The complete ecclesiological and sacramentological reasons for that were given by St. Nicodemus the Hagiorite and St. Macarius of Corinth. They correspond with the Patriarchal and Synodic letters of 1848 and 1894 in a polemic with the Popes Pius IX and Leo XIII, which recognize Roman Catholicism as a heresy and condemn the innovations that violate the apostolic rite of triple immersion in the name of the Trinity.

Despite this, in the development of the ecumenism movement, already in the 20th century, the Orthodox side gradually is adopting the sacramentological and ecclesiological illusions coinciding with the position of the Vatican and the World Council of Churches. This is in stark contrast with the decisions of the Russian Orthodox Church outside of Russia of 1971 and 1983 and the repeatedly issued messages of the Holy Community of Mount Athos against sacramental recognition of the heterodox rites.

Thus, the dispute about the sacramental validity of heretical baptism, but also its normative ritual, standing at the origins of the division between East and West, though it is officially silenced, remains an open problem in the contemporary theological dialogue. Here it is omitted the fact that over the centuries the principles of canonical accuracy (ακρίβεια) and economy (οικονομία) in relation to the baptism of heretics are factually coexisting but the second never abolished the first in the canonical ritual minimum or three immersions with one Trinitarian invocation. It is sad to say that the both sides, Vatican and Orthodox, are increasingly seeking a solace in moving away from a strict canonical discipline of the first Christian millennium, which paves the easy way to Christ, replacing it with the anti-dogmatic compromises, in which Christ Himself does not exist. Therefore, a postulate for semantic reduction of theological language to the apostolic and patristic canonical norms, as the ultimate sources of doctrinal authenticity, is a necessary condition for the sincerity and long-term effectiveness of the dialogue, together with the need for a revision of all the bilateral agreements.