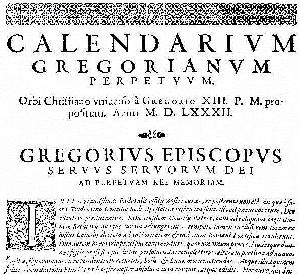 of the Patriarchal formulation of an encyclical to Orthodox Christians throughout the world not to accept the modernistic Paschalion, or calendar of the innovated Menologion, but to keep what was once for all and well formulated by the three hundred and eighteen (318) Holy God-bearing Fathers of the First Ecumenical Council, under penalty of penance and anathema.

“To all the genuine Christian children of the Holy Catholic and Apostolic Church of Christ of the East residing in Trigovysti and throughout the world, be grace and peace and mercy from God Almighty.

“No small turbulence overtook that ancient Ark, when, violently beset by billows, it floated upon the surface of the waters, and had not the Lord God remembered Noah and seen fit to still the water, there would have been no hope for it at all. Thus also in regard to the New Ark of our Church, against which misbelievers have launched an implacable war upon us, by means of these presents we have decided to leave a note that you may have in what is herein written the means of upholding and defending your Orthodoxy against such enemies more safely and surely. But, lest the composition as a whole be weary to the simpler folks, we have decided to embody the matter in common language, wording it as follows:

“From old Rome have come certain persons who learned there to wear Latin habits. The worst of it is how, from being Romans of Rumelia bred and born, they not only have changed their faith, but they even wage War upon the Orthodox dogmas and truths of the Eastern Church which have been delivered to us by Christ and the divine Apostles and the Holy Councils (or Synods) of the Holy Fathers. Therefore, cutting off these persons as rotten members, we command
“1) That whoever does not confess with heart and mouth that he is a child of the Eastern Church baptized in Orthodox style, and that the Holy Spirit proceeds out of only the Father, essentially and hypostatically, as Christ says in the Gospel, shall be outside of our Church and shall be anathematized.
“2) That whoever does not confess that at the Mystery of Holy Communion the laity must also partake of both kinds, of the Precious Body and Blood, but instead says that he will partake only of the body, and that that is sufficient because therein is both flesh and blood, when as a matter of fact Christ said and administered each separately, and they who fail to keep such customs, let all such persons be anathematized.
“3) That whoever says that our Lord Jesus Christ at the Mystic Supper had unleavened bread (made without leaven), like that of the Jews, and not leavened bread, that is to say, bread raised with leaven, let him depart far away from us and let him be anathema as one having Jewish views and those of Apollinarios and bringing dogmas of the Armenians into our Church, on which account let him be doubly anathema.
“4) Whoever says that our Christ and God, when He comes to judge us, does not come to judge souls together with bodies, or embodied souls, but instead comes to sentence only bodies, let him be anathema.
“5) Whoever says that the souls of Christians who repented while in the world but failed to perform their penance go to a purgatory of fire when they die, where there is flame and punishment, and are purified, which is simply an ancient Greek myth, and those who, like Origen, think that hell is not everlasting, and thereby afford or offer the liberty or incentive to sin, let him and all such persons be anathema.
“6) That whoever says that the Pope is the head of the Church, and not Christ, and that he has authority to admit persons to Paradise with his letters of indulgence or other passports, and can forgive sins as many as a person may commit if such person pay money to receive from him indulgences, i.e., licenses to sin, let every such person be anathema.
“7) That whoever does not follow the customs of the Church as the Seven Holy Ecumenical Councils decreed, and Holy Pascha, and the Menologion with which they did well in making it a law that we should follow it, and wishes to follow the newly-invented Paschalion and the New Menologion of the atheist astronomers of the Pope, and opposes all those things and wishes to overthrow and destroy the dogmas and customs of the Church which have been handed down by our fathers, let him suffer anathema and be put out of the Church of Christ and out of the Congregation of the Faithful.
“8) That ye pious and Orthodox Christians remain faithful in what ye have been taught and have been born and brought up in, and when the time calls for it and there be need, that your very blood be shed in order to safeguard the Faith handed down by our Fathers and your confession: and that ye beware of such persons as have been described or referred to in the foregoing paragraphs, in order that our Lord Jesus Christ may help you and at the same time may the prayer of our mediocrity be ‘with all of you: amen.

(Signed)    Jeremiah of Constantinople
Sylvester of Alexandria
Sophronius of Jerusalem

In the presence of the rest of the prelates at the Council.”

The Rudder of the Orthodox Catholic Church – Compiled by Saints Nicodemos and Agapios, pp. 13-15