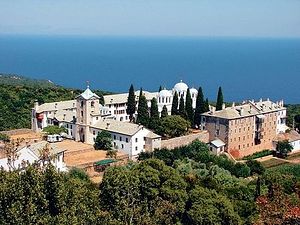 Dear parents, monks, nuns and lay people have blessed the Romanian Orthodox Church,
With great joy in my heart I learned zeal and your love for God and His Holy Church, that “no gates of hell shall not prevail”. The zeal and love that are pleasing before Christ they are united with humility conscience.
Since the “Synaxis of Volos” could not directly support parents witnesses who stopped remembrance, given that many of Synaxis not interrupted remembrance, we parents hagiorite support and encourage ceasing to commemorate that your did.
Order to stop commemoration is not to restrict us in our selfish purposes and “autosalva” of ecumenism gap, because if so, we would be most miserable than ecumenists relativists who are deceived by the old serpent. Parents should be discontinued remembrance with fear and trembling than making mistakes, not an extreme path leads souls, a delusion, lest ceasing to commemorate have been driven by human passions. And this is observed when the brothers get angry and have not reached maturity spiritual to understand that stopping commemoration is not an end in itself but a means that parents have always used as a method to eradicate heresy, putting pressure the synods and bishops to deny that heresy. Currently we dreadful heresy, which is not only a Christological heresy or pneumatological or antitrinitară, but encompasses all the new heresy of ecumenism. Ecumenism is mainly ecclesiological heresy, which attacks the very being of the Church, speaking about reaching the unit without mention about heretics. In ecumenism speaks of a Church “extra muros” (outside the church), reversing the definition of St. Cyprian (outside the Church there is no salvation), in the Declaration of Toronto, so after the new thinking ecumenical “outside the Church is Church”. In the texts of the council of Crete in chip cunning were introduced teachings diplomatic and schizophrenic, dizzying, made specifically to deceive, unclear, lacking exactness theological and encompassing all theories ecumenist: theology baptismal theology of Eucharistic theology branches and all other heretical theories, historical name of “church” for heretics, especially the acceptance of so-called heretical dialogue catastrophic platform called “World Council of churches”.

In the face of this offensive against Orthodox ecclesiology which comes officially “synod” of Crete your church hierarchy, although they had an orthodox position in discussions of Kolimbari, however, have failed, and Oh! Heretical all signed documents. Not only that, there would be a chance that the Local Church Synod in Bucharest to be rejected synodal what they signed. I read with some joy original Greek translation of the judgment of the Romanian Orthodox Church, namely that the texts should “be explained to be rejected partially or developed by a future Pan-Orthodox Synod. Explaining their (…) should not be performed under time pressure, but if there is no consensus panorthodox, they should be postponed until it is perfected and build consensus “(Basilica.ro). But later I learned that term in Romanian was “nuanced” in any case “rejected”.

Thus, following the judgment BOR gives the impression that it is not disputed sinodicitatea what happened in Kolimbari, although we already have two judgments Synod of the Orthodox Church of Antioch saying that Crete was not a council but a meeting Primates preparation of a true “Holy and Great Council” and the Synod of the Bulgarian Church, which decided that the Assembly of Crete’s no saint, sea, or Synod ( http://www.bg-patriarshia.bg/news. php? id = 220 554 ). Also, Metropolitan Seraphim of Piraeus, Metropolitan Seraphim of Kithirelor Metropolitan Pavlos of Glifada Metropolitan Ambrose of Kalavritei Metropolitan Ierotheos of Nafpaktosului and many others have expressed some terms all too hard and clear, others in Temeni May economia, but all keeping the same idea, namely that we have to deal with a council, but a formal acceptance of heresy, ecumenism in the Orthodox Church through diplomatic texts and schizophrenic.

To be signed by parents Holy Mountain.