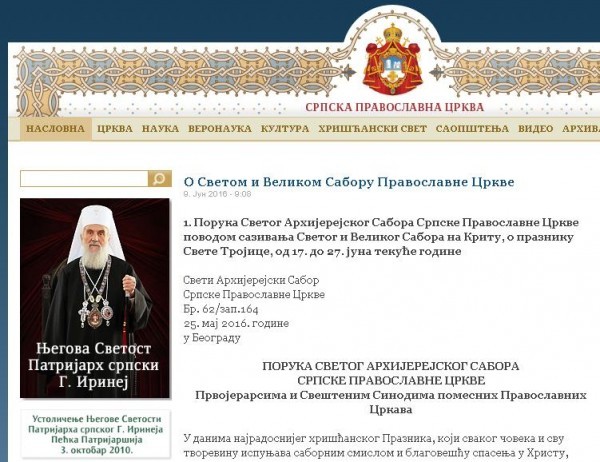 “Our Church sees obstacles to participation in the Holy and Great Council and proposes to postpone it for the time being,” the letter of the Serbian Orthodox Church Synod to the Ecumenical Patriarch Bartholomew of Constantinople, who is responsible for coordination of the preparations of the Council, said.

Before holding this historical event it is necessary to resolve the differences between the local Churches, reach a consensus and revise the draft documents due to be adopted at the Council, the press service of the Serbian Orthodox Church cited the letter as saying.

As reported, the convocation of the Pan-Orthodox Council, which has not been convened for more than a thousand years, has been prepared for over half a century and has been slated to take place on Crete in late June, was brought into question after the Bulgarian Orthodox Church and the Antiochian Church refused to participate in it.

The Moscow Patriarchate proposed to hold an urgent Pan-Orthodox Pre-Council Conference not later than June 10. It pointed out that the non-participation of at least one local Church in the Council makes the convocation of it impossible. It also said that several churches and monasteries of Athos proposed amendments to the draft documents of the Council that are in sync with the proposals of the Russian Church, and “require fundamental consideration for the purposes of finding Pan-Orthodox consensus.”

However, the Patriarchate of Constantinople, which is responsible for coordination of the preparations for the Council, declined the proposal to discuss the problems obstructing the convocation of the Council and said that it will take place regardless of the refusal of several Churches to participate in it.