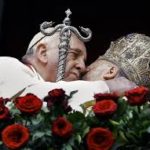 A brother in Christ reacted to the decision of some Athonite Fathers to call for cessation of commemoration of the Patriarch of Constantinople by calling them a “parasynagogue.” This is an interesting response, for it brings to light the question of how to discern where the Church is and where are heresy, schism and “illegal assemblies” (an English translation of the Greek word παρασυναγωγή).

Before one rashly “outs” these Athonites from the assembly of the Faithful, it is incumbent upon him to study the matter in its context, in its entirely. In doing so, he will see that the parasynagogue one should be referring to here, in this context of the struggle between the Athonites and the Patriarch, is the Latin’s heretical parasynagogue, which the Patriarch of Constantinople claims is a church, an ecclesial reality with mysteries. This is immediately relevant. For, in doing this, the Patriarch has separated himself from the Holy Fathers and Saints of the Church who have spoken over these past 500+ years, both individually and in council (1484, 1755, 1848, etc.) and have considered the Latin parasynagogue a heresy and not a part of the One Church.

By the Patriarch’s acceptance of this parasynagogue as “the Church”, he has introduced division into the Church, first of all separating himself from all the faithful of the past who confessed their belief in the Theanthropic nature of the Church, a nature which cannot be divided, is indivisible and is manifest in time and space as the One, Orthodox Church. It is this “scandal of the particular” which has become such a stumbling block for all sycretistic ecumenists which insist that the Church is divided (and includes Orthodoxy and the heretical parasynagogue). The Patriarch of Constantinople, the bishop the Athonites say is introducing division by preaching heresy, has repeatedly stated his belief that the Church is divided (in Jerusalem, in Rome, etc.) and needs to be united again, and in doing so he has departed from the synaxis of the Faithful and abandoned the confession of faith upon which the unity of the Church rests, that Rock of which our Lord spoke to the Apostle Peter – belief in His Divinity, His Divine-Human nature, a belief which is necessarily carried over to His Body, the Church. If, however, the Church is “divided,” then we do not believe this, and we have abandoned this confession. . .

In this context, then, one can see that the monks on Athos are, in fact, rushing to put an end to THIS division, to prevent [further] schism, not cause it. Yet, if one only looks at things superficially, as if we are viewing a corporation or a human organization, and does not analyze the implications of the apostasy from faith in the One, Theanthropic Church, he will see a parasynagogue where there is the Church and a “church” where there is a parasynagogue.