Thanksgiving Liturgy at the Convent of the Panagia Akroteriane, Serifos, Greece 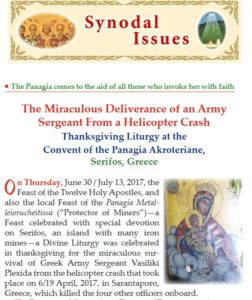 On Thursday,June 30 / July 13, 2017, the Feast of the Twelve Holy Apostles, and also the local Feast of the Panagia Metal-leiorucheitissa (“Protector of Miners”)—a Feast celebrated with special devotion on Serifos, an island with many iron mines—a Divine Liturgy was celebrated in thanksgiving for the miraculous survival of Greek Army Sergeant Vasiliki Plexida from the helicopter crash that took place on 6/19 April, 2017, in Sarantaporo, Greece, which killed the four other officers onboard.