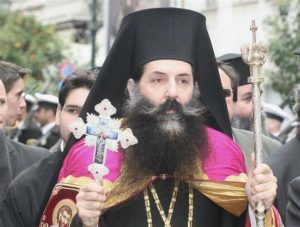 By way of the mass media we have followed with great sorrow and pain of soul the Holy and Great Synod from its inception at the Divine Liturgy on the Sunday of Pentecost. In what follows we offer some initial and concise observations on the Synod for the benefit of the people of God.

(1) We observe with sorrow the presence and joint prayer of heretical Papists, Protestants, and Monophysites at Matins and the Divine Liturgy of this great Feast of the Lord in the Church of St. Menas in Heraklion. As everyone is aware, this is prohibited by the Sacred Canons. The Orthodox Primates and other participating Orthodox Hierarchs trampled on the Canons of the Apostles and the Synods, wishing from the outset to send a message to the whole world, showing what great respect they have for the decisions of the Oecumenical Synods and, by extension, for the very institution of the Synod, about which they make bombastic declarations.

(2) The presence, at the commencement of the proceedings, of officially invited delegations of heretical Papists, Protestants, and Monophysites was an unprecedented innovation and one foreign to our Synodal Tradition. In fact, Oecumenical Patriarch Bartholomew addressed these delegates as “representatives of Sister Churches” before the Holy and Great Synod made any decision regarding the ecclesiality or non-ecclesiality of the heretical communities in question. Thus, Patriarch Bartholomew, through a fait accompli, sent another message to the members of the Synod: that he had no intention of calling the heterodox heretics. Instead, he called them Sister Churches. Never in the history of the Oecumenical or local Synods during the Byzantine period were “observers” present at such Synods, and as dignitaries, to boot, whose heretical doctrines were condemned by previous Oecumenical Synods. Heretics were, of course, invited, but as persons subject to trial, in order to defend themselves, and not as guests of honor. It was only at the First and Second Vatican Councils that the phenomenon of “observers” made its appearance. The Holy and Great Synod is evidently copying Roman Catholic models.

(3) The Holy and Great Synod began its proceedings in violation of its “Organization and Working Procedure,” which was signed at the Synaxis of the Primates in January 2016. The document in question prescribes that the Synod be “convened by His Most Divine All-Holiness, the Oecumenical Patriarch, with the consent of Their Beatitudes, the Primates of all of the universally recognized local Autocephalous Orthodox Churches” (Article I). Four Autocephalous Churches—those of Russia, Bulgaria, Georgia, and Antioch—justifiably disagreed with the convocation of the Synod and asked for its postponement, thus, the condition “with the consent of Their Beatitudes, the Primates” was been fulfilled. Consequently, there was no justification, on the basis of the aforementioned “Organization and Working Procedure,” for either the Oecumenical Patriarch or all of the remaining local Churches together to convene a Synod, if they wished to be consistent with the “Organization and Working Procedure” that they signed.

(5) The Synod inaugurated its work on the basis of an “Organization and Working Procedure” that was not unanimously accepted by all of the Primates at their Synaxis of January 2016, since the Church of Antioch did not sign it. It also commenced its work on the basis of the six unanimously accepted documents of the Fifth Pre-Synodal Consultation, which basis proved to be insecure and unstable. This is because the six pre-synodal documents were unanimously approved by the representatives at the Fifth Pre-Synodal Consultation and by the Synaxis of the Primates (January 2016), but not by all the Hierarchies of the local Autocephalous Churches. When these Churches, and especially those of Bulgaria, Georgia, and Greece, studied the aforementioned documents, they found in them gaps, obscurities, and cacodox formulations, for which they suggested emendations and corrections. For these Churches which proposed the corrections and changes in question it is self-evident that the pre-synodal documents are no longer in force.

The fact that the Primates signed the six documents of the Fifth Pre-Synodal Consultation does not mean that the Hierarchies of the local Churches are bound by their signatures to accept these texts as they stand. The personal opinion of a Primate on any particular issue is not binding on the Hierarchs in the Synod to which he belongs and does not obligate them to fall in line with his opinion. Were that so, the synodal institution would be annulled and every Primate would be transformed into a Pope. It is not the Primate, but the Synod of Bishops that is the supreme administrative organ in the local Orthodox Churches. In view of all that we have said, it is clear that the following assertion by the Oecumenical Patriarch in his opening address is completely erroneous: “We proceed, then, with our work on the basis of documents unanimously approved by our Churches, which each Church has already endorsed.” By “documents unanimously approved” the Oecumenical Patriarch evidently means the documents of the Fifth Pre-Synodal Consultation, which were signed at the Synaxis of the Primates (January 2016), but which have no validity for certain of the Churches after the corrections and changes dictated by their Synods.

(6) The four Churches that did not participate in the Synod were denigrated before an international audience. Their absence was represented both by the Oecumenical Patriarch and by other Primates in their opening addresses as wholly unjustified and reprehensible. To a greater or lesser extent these Churches were portrayed as being responsible, by virtue of their absence, for creating schisms and divisions. However, the Churches in question did not take part, not because they were “piqued,” but because they discovered weaknesses in the pre-synodal documents after examining them in synod. They naturally requested that the Synod be postponed, in order to study the documents in greater depth, make necessary corrections, and thus produce new documents which would be unanimously approved by all of the local Churches. Since their proposal for the postponement of the Synod was not accepted, these Churches understandably did not participate in the Synod.

(7) Most distressing among all of these observations is the acknowledgement, in essence, by way of an obscure and cryptic new formulation in the document “Relations of the Orthodox Church to the Rest of the Christian World,” of the ecclesiality of the heterodox. The Synod unanimously accepted the formulation, “The Orthodox Church accepts the historical name of other heterodox Christian Churches and Confessions,” instead of the formulation, “The Orthodox Church acknowledges the historical existence of other Christian Churches and Confessions.” That is to say, the word “existence” is replaced by the word “name,” and to the phrase “Christian Churches and Confessions” is added the adjective “non-Orthodox.” Archbishop Hieronymos of Athens proposed this change in the formulation after many hours of discussions and deliberations, during which many conflicting views were expressed.

Archbishop Hieronymos states that, by virtue of this new formulation, “we have reached a synodal decision that, for the first time in history, defines the historical scope of relations with the heterodox not in terms of their existence, but solely in terms of their historical appellation as heterodox Christian Churches or Confessions.” This raises a justifiable question: “How is it possible for one to name something, while at the same time denying the existence of that which he names?” Likewise, from a dogmatic standpoint, endorsement of the term “heterodox Christian Churches or Confessions” is contradictory and unacceptable. Heterodox Confessions cannot be called “Churches” precisely because they accept other, heretical doctrines and, as heretics, cannot constitute “Churches.”

For the time being, we confine ourselves to the foregoing comments, although that does not mean that the list of sorrowful observations ends here. In view of all that we have mentioned above, the following question naturally arises: What can one expect from a Synod that commenced and proceeded in such a way?

As the Lord observes: ““For a good tree bringeth not forth corrupt fruit; neither doth a corrupt tree bring forth good fruit; for every tree is known by its own fruit” (St. Luke 6:43-44). Let each reader draw his own conclusions.