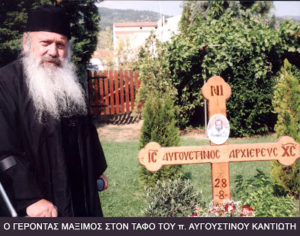 The occasion for me to write this article arose from the grief I feel whenever I hear the bishops of the so called “new lands” of the Greek Church commemorate Patriarch of Constantinople, Bartholomew—especially when he is commemorated as “the one who is rightly proclaiming the word of [Your] Truth,” addressing God, without fear and without shame, during the holiest moment of the Divine Liturgy.

Priest (intones): Among the first, remember, Lord, our Bishop (Name). Grant that he may serve Your holy churches in peace. Keep him safe, honorable, and healthy for many years, rightly proclaiming the word of Your truth.

In his message to the 2001 “World Conference Against Racism” held in Durban, South Africa under UN auspices, he wrote the following horrible words: “The Orthodox Church does not seek to convince others about a specific perception of the truth or of the revelation, neither does she seek to convert them into a concrete way of thinking”! That is, “Your All Holiness,” when Christ ordered His disciples, at the time of His Ascension to Heaven, “Go therefore and make disciples of all nations…teaching them to observe all that I have commanded you,” He did not want “to convert them into a concrete way of thinking” denouncing their false religions, and accepting the preaching of the apostles?

“The Lord said, I am telling you the truth: the man who does not enter the sheepfold by the gate, but climbs in some other way, is a thief and a robber.” (John 10:1)

How can “the one who is rightly proclaiming the word of Truth” teach contrary to Christ’s teachings? Or, perhaps, the words of Christ, “I am the Way, the Truth and the Life” are not true, and the false words of Mr. Bartholomew are true? But probably “the one who is rightly proclaiming the word of Truth” must be right, since he is called “the All Holy One,” while Christ is called simply, “Holy,” although He is God! You see, “His Most Divine All Holiness” has everything in superlatives! On the one hand, the title “His All Holiness” was acquired effortlessly on account of his position (Patriarch of Constantinople), while he has obtained the rest of the titles with great effort and toil (by being blasphemer and heresiarch), as he travels in great luxury around the world!

But let us now return to the “unspeakable words” of “the one who is rightly proclaiming the word of Truth.”

If any Clergyman, or Layman, enter a synagogue of Jews, or of heretics, to pray, let him be both deposed and excommunicated.
CANON 65, The 85 Canons of the Holy Apostles, The Rudder

“No one comes to the Father except through Me…”

In his message to Muslims the world over, on the occasion of the religious feast of Ramadan in 2001, he wrote: “God takes pleasure in the peaceful coexistence of humans and, indeed, of those who worship Him, regardless of differences that exist in faith among the three great monotheistic religions”! So who speaks the truth now? Christ, who says that, “No one comes to the Father except through Me,” or “the one who is rightly proclaiming the word of Truth,” who says that God is pleased with the prayers of the Muslims (and the Jews)? I wonder how God tolerates this blasphemer and heresiarch to be called “the one who is rightly proclaiming the word of Truth” and does not send down fire to burn us—both those who commemorate him, and us who hear these words and do not protest!

“To confess Jesus Christ is a great feat, and the Lord promised that He will glorify, in front of the heavenly Father, those who confess Him (see Mat. 10:32). But when does the Lord esteem such a confession? When it is done in an environment that is hostile to the faith and when the one who makes such a confession is in danger of suffering persecution and tribulation because of it. When one confesses Christ under such circumstances, he shows that he is ready to suffer martyrdom for Him. This is why his confession has such a value.” Saint Theophan the Recluse,
Preaching Another Christ: An Orthodox View of Evangelicalism

And what shall we say about his visit to the Synagogue of the Jews in New York in 2009, and the “unspeakable words” he uttered there, although the sacred canons of the Church forbid us Christians—with heavy penances—even to simply enter a Jewish synagogue! Although he was talking for quite some time, not even once did he mention the name of Christ, although he should have cried in a loud voice, “Let the Jews say how the soldiers lost the king, when they were keeping watch. And how did the stone not keep in the Rock of Life? Let them either produce Him who was buried, or worship the One who has risen, saying with us: Glory to the abundance of Your tender mercies, O our Savior, glory to You!” (Sunday of the Myrrh-bearers)

Lord, have mercy on… the Saints?

I will also relate the blasphemous address of the Ecumenical Patriarch during the Patronal Feast of the Patriarchate, on Nov. 30, 1998, to the papal delegation: “Your Eminence, Cardinal William Keeler and our other brothers in Christ constituting the delegation of the Church of Rome… We must not waste time in search of responsibility. Our forefathers who bequeathed to us the split were the unlucky victims of the evil serpent and they already lie in the hands of righteous God. Therefore we request God’s mercy on them, but it is our duty before Him to restore their errors!”

Learn what is holy

Finally, I will mention how he gave the “Holy Koran” as a gift to the president of Coca-Cola, Muhtar Kent, in Atlanta in the United States in 2009. It seems that the “Most Holy One” often confuses the words “holy” and “profane,” so that he calls the unholy Koran “holy” without fear of God and without shame!

From all these and many other words and acts of “His All Holiness,” it is evident that “the one who is rightly proclaiming the word of Truth” is the biggest blasphemer and the biggest heretic of all time!

Despite all this, I pray from the heart to the loving God to grant us and to him repentance and confession of the Name of the Triune God—Father, Son and Holy Spirit—for the salvation of all people and the enjoyment of eternal blessings. Amen.

Emphasis by the translator, FEH.